Start a Wiki
This article is need of a clean-up.

This generally means that it is below wiki standards and requires an overhaul to bring it up to par.

You can help out Courage the Cowardly Dog Wiki by re-organizing parts of the article, checking grammar and spelling, and/or doing other things to help improve the article in general.

Charlie the Mouse (referred to by Courage as Mr. Mouse) is a recurring character, and typically assists Courage in resolving the episode's conflict.

From Charlie's tall stature, gruff appearance and notable anchor tattoo, anyone would be terrified. In actuality, he is very charitable and will take time in any situation to help out. Whether it be driving long distances, eating repulsive cheese, or even staying right at home in his diner, Charlie is the go-to guy for brief, one-liner resolutions.

Most of his weight appears to go directly to his stomach area as well as his chest and arms, very skinny legs, very skinny forearms, arms appear much larger in size compared to his forearms, he always wears a vest and a pair of black gloves.

Courage hires Charlie the Mouse to get rid of the stinky cheese from Le Quack before he force-fed to Muriel. After Courage slams the door on Le Quack's face. He opens the door and to find Charlie the Mouse. Charlie wears his bib (showing a picture of a cheese) and planted a fist at Le Quack in his face and devours the stinky cheese. After that, Courage shows up and pays Charlie saying "Thanks Mr. Mouse", with him replying "No prob.' and he leaves the scene.

The Forbidden Hat of Gold

Charlie the Mouse was seen working as a postman and gives Courage a swipe machine. Where Courage swipes his credit card and once keying in his PIN number, Courage says "Thanks Mr. Mouse" and him replying "No prob" and he enters the post truck and opening the back of the truck releasing tons of parcels falling over Courage, including a big parcel for the Golem and he drives away, leaving the scene.

Charlie is seen in a bar, drinking root beer. He buys Courage a mug of root beer and tells Courage the Cowboy about the Whip's return, which scares the residents. He also thinks that Courage does not believe in rumors, and after a short while, he quickly leaves the scene.

Charlie works as another bartender in a bar. He is shown to help Courage to find the Storm Goddess' lost pet dog, Duncan. He tells Courage that he has seen Duncan go down the drain hole.

Charlie tells Courage as he arrived to his diner where to find Bunny. After telling him, it is found out that he has a love interest in her. 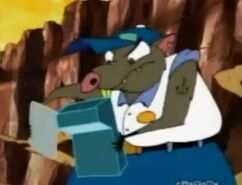 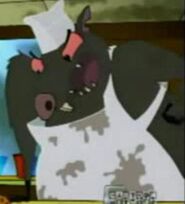 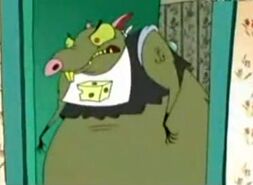 Add a photo to this gallery
Retrieved from "https://courage.fandom.com/wiki/Charlie_the_Mouse?oldid=35128"
Community content is available under CC-BY-SA unless otherwise noted.