David Steven Cohen was the head writer of Courage the Cowardly Dog. He has done guest writing for a variety of well-known children's television shows, including Phil of the Future, Tiny Toon Adventures, and Viva Piñata. Additionally, he did work as a producer and as a story consultant for programs in the mid-eighties and nineties. He has been nominated for two Primetime Emmy awards, each for his work on The Wubbulous World of Dr. Seuss.

Episodes he worked on include: 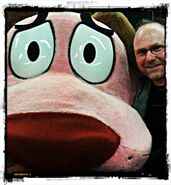 Add a photo to this gallery
Retrieved from "https://courage.fandom.com/wiki/David_Steven_Cohen?oldid=31183"
Community content is available under CC-BY-SA unless otherwise noted.