Money, his truck, his Chair, his favorite sheet, his TV, his newspaper, briefs, tormenting Courage and hotdogs

"The Chicken from Outer Space"

• "Stupid dog!"
• "Ooga Booga Booga!"
• "What did I do?"
• "What's huh?"
• "Get away from me!"
• "Muriel, where’s my dinner?!"
Eustace Bagge is the anti-heroic tritagonist of the series Courage the Cowardly Dog. He is a farmer who lives in the middle of Nowhere, Kansas with his wife Muriel Bagge and her dog Courage. He is normally antagonistic to Courage and has been the main villain of several episodes: but he has also has had to frequently ally with or be rescued by Courage, occasionally showing him respect as a result.

Eustace wears a pale yellow shirt with olive green overalls with black buttons, he also wears a dark brown hat and large black shoes. In dim lighting, his shirt appears to be orange and his overalls, dark green.

Under his hat he is bald. Eustace does not appear to have any teeth.

Eustace is a very cynical and jaded old man who is usually irritated and frustrated by the world around him. Eustace has an unquenchable thirst for monetary gain. In almost every episode, he is seen sitting in his favorite red chair while reading a copy of the Nowhere newspaper and possibly watching his television which he deems precious to him. He has an adamant disliking for Courage and frequently calls him "stupid dog", taking great pleasure in scaring and messing with him whenever possible, which largely stems out of jealousy that Muriel constantly pampers and dotes on Courage; however, it is not uncommon for Eustace to scare or mess with Courage just for fun or to get Courage to leave him alone.

Lack of talent and good looks fuel Eustace's demeanor that has been a wreck since his childhood. Throughout his life, he lived under the shadow of his mean spirited brother Horst, was hated by his mother; and neglected by his father. This is probably why he is so angry all the time. He is in constant denial over his lack of abilities and, as such, believes he can fix anything. Eustace is excruciatingly greedy, and will seize any opportunity to be paid. Courage's arrival was an unwelcome addition to his life, as it distracts his wife Muriel from feeding him; a fact that he emphasizes frequently, and paying attention to him in general. Despite this, Eustace has shown a genuine love towards Muriel (though not unbending in the least) and has on occasions allied with Courage to protect her. He is immune to emotions but has a soft spot for children that remind him of himself. His constant tormenting of Courage seems to be a disguise to cover up his own cowardice, which is also quick to be displayed in a scary situation; in fact, he often displays even more cowardice than Courage himself. His favorite musician is Velvet Vick, and his interests include watching television, fishing, and reading his newspaper. 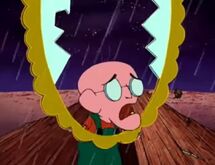 Eustace was raised in a small household with his deceased father (whom he bares a great resemblance to), mother, and his deceased older brother Horst. At the beginning of the series, he is already married to Muriel and lives with her and their dog, Courage, in the middle of Nowhere where they are constantly subjected to a series of unfortunate events.

He is referred to by Shirley, the medium, as "The Stupid One" because he never listens to her nor does he do the right thing, which always leads to some ominous portent, such as being cursed, or having magical chaos rained down upon him. Eustace has frequently remained the victim of misfortune even after an episode ends: occasionally being maimed or killed on multiple occasions.

The image gallery for Eustace Bagge can be found here.