In "Journey to the Center of Nowhere," these Evil Eggplants attacked Muriel because she was in the midst of cooking their kind. Before they attacked her, Courage came down wearing an eggplant costume and they believed he was "The Great Eggplant," but not for long, as they soon discovered the truth and ripped the costume off of Courage. Courage then learned that eggplants get angry if they need water; they are now living happily because Courage gave them some water. 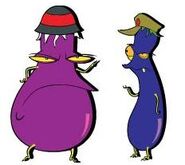 Bobby Ganoush and Ratatouille, two notable eggplants.
Add a photo to this gallery
Retrieved from "https://courage.fandom.com/wiki/Evil_Eggplants?oldid=31211"
Community content is available under CC-BY-SA unless otherwise noted.