His brother.
Horst Bagge is Eustace's late older brother. Despite his death prior to the show, his legacy continues to plague Eustace on various occasions.

In contrast to Eustace, he was successful at any act he performed. He was a skilled hunter, a remarkable explorer, and collected several billion dollars over his lifetime. His ego is as massive as his profit, as he recognizes his own superiority. Throughout all his accomplishments, he never once enabled Eustace to be anything more than his "useless" younger brother. Horst has an odd connection to the supernatural. A photo of him shows conquest of a tentacled creature, and his box of money is seemingly an infinite realm containing a demonic monster.

Despite his seemingly mean demeanour towards Eustace, he may have some degree of care towards him. This can be seen when he initially refused to reveal the location of the key to his money box. Furthermore, he hid the key inside Eustace's hat for reasons unknown, which may mean that he trusted Eustace to some extent. And, the reason he never allowed Eustace to accompany him during his many travels is to keep him safe from any danger. It should be noted that it was Courage who always save Eustace from many danger with the latter always ignorant of it.

Eustace and Horst's sibling rivalry was an unbalanced struggle that stretched through most of their lives. In their younger days, Horst was an amazing hunter, partnered with his favorite gun that he called Big Bob. The farmhouse was decorated with his trophies, but he didn't ever allow Eustace to accompany him.

As an adult, Horst became a renowned explorer, well known for his discoveries of the Spa of Horns (Ep.44-2) and the Golden Hat (ref.Forbidden Hat of Gold). He created a legendary map to the latter, the location of which remains an archaeological mystery to this day. His finds gave him a prosperous fund that he kept hidden away within a secret box. By the time of his death, not a single person knew where the key to said case was, including Eustace. Posthumously, Horst was contacted by a medium, hired by his brother in an attempt to find the missing key.

He denied this information, claiming the box held nothing for Eustace. After much insisting, he submitted and revealed that it was hidden in his hat's lining, but warned Eustace one final time not to open the box. It is unknown whether this was to protect Eustace from the demon within it, or keep his fortune concealed from him. 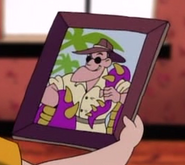 The Forbidden Hat of Gold

Retrieved from "https://courage.fandom.com/wiki/Horst_Bagge?oldid=35196"
Community content is available under CC-BY-SA unless otherwise noted.