Courage the Cowardly Dog
Register
Don't have an account?
Sign In
Advertisement
in: Episodes, Season 1, 1999,
and 2 more
English

Eustace finds an ad in the newspaper claiming that there is a hair growth experiment that can remedy baldness. While reveling in the prospects of no longer being bald, Muriel asks him to fix the creak in her chair. Eustace brushes off her request, instead wanting to go to the institute. He grudgingly takes Courage along after Muriel tells him that he was in need of a haircut, but never stops to get Courage groomed.

In the waiting room, the two see Floyd, who expresses much gratitude after leaving his consultation with a bottle of hair growth formula. Eustace is next for his appointment and goes through a series of very irrelevant and stressful tests.

Courage breaks free from his leash to use the restroom. He finds Floyd applying the experimental formula to his head before washing his hands. When he realizes that the paper towel dispenser is empty, he becomes irrationally enraged. His face turns red and veins pop up from his skin. His focus on the empty dispenser causes the whole restroom to tremble until, ultimately, the dispenser explodes, leaving a large hole in the wall and the bottle of growth formula rolling to Courage's side. Out of curiosity, Courage reads the label on the bottle and discovers that it has a very dangerous side effect:

Realizing the imminent danger as Eustace is never known for watching his temper, Courage tries in vain to warn Eustace of what he just witnessed in the restroom by turning into the old man and applying the formula, then becoming angry and exploding into nothingness, but Eustace falls on deaf ears. On the way home, Eustace applies the formula while driving and is almost immediately cut off by Di Lung who insults him. As he speeds off, Eustace starts fuming with rage. His intense focus on Di Lung causes the young man's car to explode, sending him flying.

At home, Eustace applies more formula to his head while Courage struggles to keep Muriel away from his outbursts. Eustace becomes angry when he can't fix Muriel's chair, but the phone rings and catches his attention causing it to explode instead. He becomes angry once again when Muriel asks him to open a can of dog food, blowing up the top of the lid as well as the entire kitchen in the process.

With no results so far, Eustace applies the formula quite liberally, which causes Courage to attempt to keep him calm, especially to Muriel's frequent badgering. He again becomes angry when he attempts to thread Muriel's needle. The whole house begins to quake with his frustration and Courage grabs Muriel in her chair to escape the impending explosion, but unfortunately for him, the door has been blocked by a tipped over grandfather clock. Just when Eustace's anger peaks, a long curly hair sprouts from his head. It temporarily abates his anger until the curl falls flat, thereby resuming the cycle. Courage manages to break through a window and vamoose with Muriel just before Eustace explodes one last time, killing himself and destroying the entire house in the process.

Among the wreckage, Muriel tells Courage to remind her that whenever Eustace returns to ask him to fix her chair. 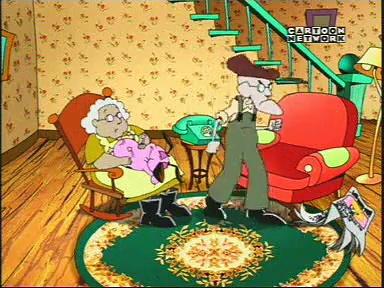