John Russell Dilworth (born February 14, 1968 in New York City, New York) is an American animator. He is best known as the producer, director, writer, and creator of the animated television series Courage the Cowardly Dog.

Dilworth attended the School of Visual Arts in New York, where he graduated in 1985 with a Bachelor of Arts. After graduation, Dilworth became an art director at Baldi, Bloom and Whelan Advertising, but continued to work on his own films in his spare time, providing much of his own funding. His animated short, The Chicken from Outer Space, was nominated for an Academy Award in 1996. Cartoon Network later commissioned Dilworth to turn the short into a series, which eventually became the wildly popular and critically acclaimed Courage the Cowardly Dog. Dilworth is the president of Stretch Films, a New York-based design and animation studio, which he founded in 1991.

Dilworth's short Angry Cabaret was also featured in MTV's 1999 Animation Weekend. His breakout film was The Dirdy Birdy. He served as animation consultant on Gumby: The Movie. Dilworth also worked on the original opening for Hanna-Barbera and for the show Dexter's Laboratory. His film, Life in Transition, was included in the Animation Show of Shows.

Psyched for Snuppa, a short film created by Michael Pearlstein and animated by Dilworth, was spun-off into a series called Sniz & Fondue which became part of Nickelodeon's KaBlam! from seasons 1 through 3. However, Dilworth had no involvement with the series aside from the pilot. 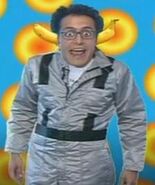 Retrieved from "https://courage.fandom.com/wiki/John_R._Dilworth?oldid=35489"
Community content is available under CC-BY-SA unless otherwise noted.