Mecha Courage is a robot dog who was created by Di Lung in order to replace Courage. This robot dog only appeared in the Season 3 episode titled Courage vs. Mecha-Courage.

Mecha Courage was built by Di Lung to replace Courage. The robotic dog almost gained the affection of Eustace and was able to fool Muriel into thinking it was the real Courage. Courage continuously tried to prove he was their dog but was unsuccessful in doing so. Courage eventually challenged Mecha Courage to a gladiatorial battle in an abandoned coliseum. Courage found himself no match for Mecha Courage's insane arsenal of weaponry, but thanks to his inhuman amount of sheer durability and perseverance, he was able to survive Mecha Courage's onslaught long enough to drain its battery, destroying it, much to Di Lung's sadness and disappointment.

Mecha Courage's dome piece conceals a vast arsenal of comically insane tools and weaponry. Its metal body also makes it very durable. It rolls around on four small wheels and can do so at quick speeds.

Though the robot functions on batteries and they only last for a specific time. If these batteries run out, it will cease to function and break down. 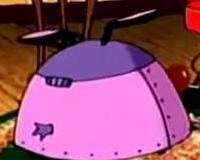 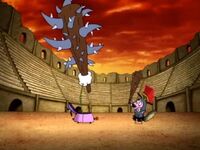 Courage vs. Mecha Courage
Add a photo to this gallery
Retrieved from "https://courage.fandom.com/wiki/Mecha_Courage?oldid=35735"
Community content is available under CC-BY-SA unless otherwise noted.