Being sarcastic and nasty, ripping money

Mr. Nasty is a character from Angry Nasty People. He is the embodiment of all of Eustace Bagge's nastiness, cruelty and negative emotions. He starred in The Angry Nasty People show. He left the show when Benton Tarantella found a new star, Courage. Mr. Nasty went on to create his own talk-show with Eustace, who he swindled out of 95% of the profits.

Mr. Nasty looks identical to Eustace except that he wears black-lens glasses and emits a dark blue glow. He looks like Eustace was possessed by another demon, not The Mattress Demon. His glasses look like sunglasses and his dark blue suit looks like Muriel hasn't washed them for a year. See McPhearson Phantom Ghost. 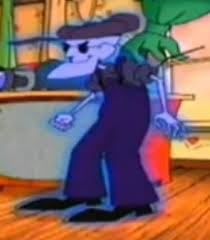 Retrieved from "https://courage.fandom.com/wiki/Mr._Nasty?oldid=34683"
Community content is available under CC-BY-SA unless otherwise noted.