Jim Mitchell
"Perfect" is the second half of the thirteenth episode in Season 4 of Courage the Cowardly Dog, written by Billy Aronson. It aired on November 22, 2002, it is the final episode of Season 4 as well as the series finale.

While working with Courage around the farm, Eustace cites Courage's incompetence, telling him that he cannot do anything right. While Courage is in the kitchen with Muriel and trying without success to perfectly make some baklava, a mysterious, elderly school teacher named The Perfectionist appears. Strangely, she can only be seen by Courage, implying that she may be imaginary.  She claims that Courage is 'a disgrace' and, knowing of Courage's struggles, decides to train him strictly into becoming a perfect dog.

The Perfectionist tells Courage that he must prove that to her that he is "perfect" by going through several "perfection lessons". She first has Courage balance heavy books on his head while going up the farmhouse's stairs, saying that he needs to keep all books on his back while walking up the stairs in order to "walk perfectly". Courage, however, makes it up the stairs as all but one of the books start falling off his back. The Perfectionist harshly scolds Courage, who whimpers, teary-eyed.

Since it is late, The Perfectionist has Courage go to bed and "sleep perfectly". However, Courage finds himself without any sleep, because of nightmares with themes around imperfection. The next morning, he is excused to go to the bathroom and brush his teeth perfectly. A fish in the bathtub tells Courage that there is no such thing as being perfect, and that even with all of his imperfections, Courage can do anything. When Courage exits the bathroom, he notices that Eustace and Muriel also have imperfections with Eustace's broken bugle and Muriel's bubble gum-like baklava, with both proudly making the best of them.

Returning to The Perfectionist, Courage is told that he must go through one last examination; if he fails, he will be labeled as "imperfect". Courage's final lesson is to draw a "perfect" number six. Courage scribbles something down on a paper, which resembles a cartoon, He folds the paper and turns it upside down; a six is shown on the paper. The Perfectionist then screams and smashes her yardstick on Courage's desk and begins to surreally melt into a puddle of nothing as she rants about Courage being imperfect. She finally vanishes after uttering 'perfect' one last time, and her chalkboard explodes into dust. The episode ends implying that Courage has accepted the fact that he is perfect the way he is, and eats at the dinner table with a happy Muriel and Eustace. The fish from before is shown cooked on the table, and he gives the audience a thumbs up, ending the episode and the series. The Perfectionist is then heard saying "Perfect!", during the ending-sequence. 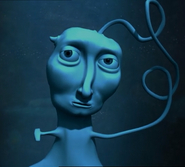 Nightmare sequence 5
Add a photo to this gallery
Retrieved from "https://courage.fandom.com/wiki/Perfect?oldid=35539"
Community content is available under CC-BY-SA unless otherwise noted.