Shadow is the shadow of a cruel, rich old guy who broke free when he died. He found the Bagges' house and started scaring Eustace and Courage. It is eventually revealed that he just wanted to be a star in show business, and that if he wanted to be a star, he shouldn't have scared people. Courage took him to be a shadow of a real star, where he became very happy, and waved goodbye to him. 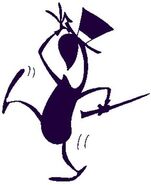 Add a photo to this gallery
Retrieved from "https://courage.fandom.com/wiki/Shadow?oldid=35601"
Community content is available under CC-BY-SA unless otherwise noted.