"The stupid one. He opened the box, yes?"

Shirley the Medium is a Chihuahua who has a frequently occurring role on the show as an anti-heroine. She is voiced by actress Mary Testa.

Shirley is a small green Chihuahua with purple eyelids, long eyelashes tipped with small gold balls, a purple nose and black paws. She has heterochromia, her right eye has an orange iris and the left one has green and orange coloring. She wears a large golden earring on her right ear. Her attire consists of a green dress covered by a purple cape and a blue hood.

Shirley is a mystical fortune teller whose primary pastime is casting curses on those who defy morality. She despises the greedy, the wrathful and the inhospitable, and subjects them to spells that only repair when their sins are reversed. Ironically, she is very fond of money; charging heavy fees on clients and selling herself on TV are some of the ways she obtains it. This is probably because she is actually poor (as shown in The Curse of Shirley) while living in the outskirts of Nowhere in her gypsy wagon. It may also be out of a desire to punish Eustace, whom she charges the most and whose actions annoy her the most.

She commonly refers to Eustace as "the stupid one" because his mother Ma Bagge calls him "stupid boy", just like how he calls Courage "stupid dog" and seems to have a particular grudge against him. She seems to not mind Muriel and seems to have an at least mutual relationship with Courage. She can also play the saxophone well and uses this to attract money. In Swindlin' Wind her curses are based on the crimes the couples have committed against her, and she removed them (without being asked) after seeing one member of the couple shows concern for the other, smiling as she does so.

Shirley's earliest known curse was brought upon famous pianist Velvet Vic, confining him within his own record in the episode Record Deal. The spell enabled him to escape only when the album was played, however she buried it deep inside a chest, removing that possibility.

Her services as a spiritualist are advertised on the Channeling Channel. It is in this way that she was found by Muriel and Eustace seeking to communicate with his deceased brother Horst, after warning him of the consequences of contacting.

When she offered her service to Eustace and Muriel after being called to contact Eustace's dead brother, she warned them both,"if you contact the dead for personal gain, there will be tragic consequences!"

The Curse of Shirley - Upon your shiny head, a curse. Long as your soul lives in your purse. And with your coins you cannot part, your sky shall be dark as your heart.

Swindlin' Wind - Swindlin' man and swindlin' wife, bear this curse upon your life. Instead of swindlin' for your lover, you shall swindle one another.

Muted Muriel - From deep below the planet shell, deeper than the deepest well. May forces rise to break the ground, and cause your Muriel to sound. If your Muriel won't speak, much havoc will these forces wreak. Or in other words it will not be pretty. 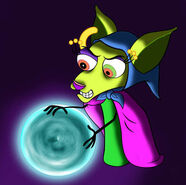 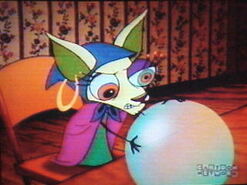 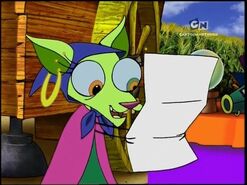 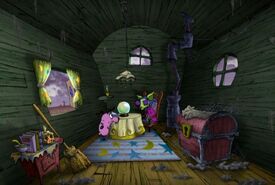