Courage the Cowardly Dog
Register
Don't have an account?
Sign In
Advertisement
in: Characters, Antagonists, Former villains,
and 6 more

Spirit of the Harvest Moon

Spirit of The Harvest Moon

The House of Discontent

The Spirit of the Harvest Moon is a demonic spirit from The House of Discontent.

He was upset with Eustace and Muriel for not respecting their land and never giving an offering on the night of Harvest Moon. Because of this, he casts a spell on the farm causing all sorts of strange events and then demands that their departure from the house. Following the refusal of Eustace and Muriel, the spirit offers them ten minutes to grow a plant. When Eustace refuses to grow something, Muriel and The Spirit argue with him, calling him "stubborn" and "not a farmer", respectively. When the ten minutes is up, The Spirit raises the temperature to molten hot, which causes everything to melt. Courage grows a plant using Eustace's sweat. When the plant grows, The Spirit lowers the temperature back to normal and leaves with a cryptic message about how they grew more than just a plant. The Spirit is played by Fred Melamed. 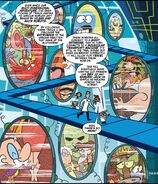 Seen on the bottom between Muriel and Eustace.
Community content is available under CC-BY-SA unless otherwise noted.
Advertisement