The Chicken from Outer Space

John R. Dilworth
The Chicken from Outer Space is the pilot episode of Courage the Cowardly Dog. It was first shown during The What-A-Cartoon! Show on February 18, 1996.

The episode begins with an elderly couple, Eustace and Muriel Bagge, who live on a farm and own a dog named Courage. The family are spending an idyllic morning together, when Courage becomes frightened by a small mouse; this prompts Eustace to scare him further by use of a voodoo mask. Courage moves outside to the porch, and watches as a UFO descends from the skies. An extraterrestrial species of fowl emerges from this UFO.

Courage runs back inside the farmhouse to alert his owners of the danger; however, when they follow Courage into the yard, the saucer has disappeared, along with the alien chicken. Eustace proceeds to scare Courage once more, causing Muriel to strike him with a rolling pin as punishment. Courage makes his way out to the hen house, where he discovers the Space Chicken dispatching the hens Eustace and Muriel tend to.

Courage quickly runs back to the house to alert Eustace and Muriel to the presence of the alien fowl, but when Muriel returns with Courage to the hen house, the remains of the hens have mysteriously disappeared, with only the Space Chicken in their place. While Courage attempts to deduce what happened to the other hens, Muriel unknowingly takes some of the Space Chicken's eggs. Courage is able to knock two of them onto the ground; this angers the Space Chicken, who proceeds to lock Courage in the hen house upon Muriel's departure.

While Courage is making his escape from the hen house, Muriel fries the alien eggs and serves them to herself and Eustace. Courage succeeds in escaping and begins searching for a buried object. At the house, Eustace eats the eggs and begins to sweat profusely, before his eyes seemingly change color. Courage recovers his old slingshot and rushes back to the house, while Eustace begins transforming into an alien fowl himself, laughing insanely all the while. Muriel realizes the eggs are the cause for Eustace's ailment and avoids eating them. Courage arrives back at the farmhouse and ambushes the alien, momentarily knocking him unconscious with the sling-shot. The bird quickly recuperates and a fight ensues.

Courage and the Space Chicken attempt to negotiate for Muriel's safety through numerous games, such as rock-paper-scissors and fencing, while Eustace slowly completes his transformation. A mindless Eustace slowly advances upon Muriel, while Courage succeeds in the games against the alien. However, the Space Chicken reveals a large beam gun and attempts to assassinate Courage with it; Courage is able to dodge the beam, leading to it bouncing back onto the chicken, seemingly destroying him. Courage then shoots the alien Eustace with the same gun, causing him to disintegrate into a pile of ash.

While Courage and Muriel are lounging peacefully in a rocking chair, a mouse is seen ingesting some of Eustace's ashes, before its eyes change color. Courage screams in terror, ending the episode on a cliffhanger. Before the iris out, Courage turns to us and says one thing: "This shouldn't happen to a dog!"

Courage's character design for the pilot. 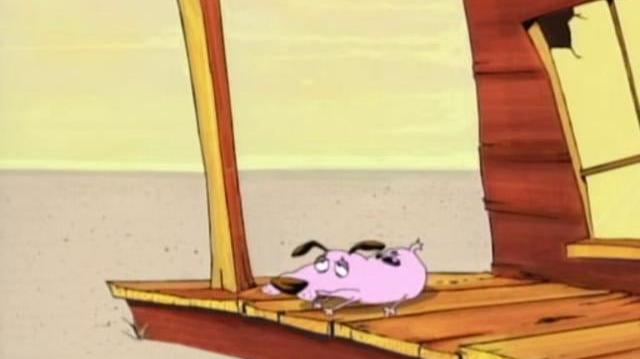 Pilot - The Chicken from Outer Space - video
Add a photo to this gallery
Retrieved from "https://courage.fandom.com/wiki/The_Chicken_from_Outer_Space?oldid=35191"
Community content is available under CC-BY-SA unless otherwise noted.