Jim Mitchell
The Mask is the seventh episode of season four. It is both parts one and two of the forty-sixth airing of Courage the Cowardly Dog, and the ninetieth episode overall. It is one of only two double-length episodes in the series' history, the other being The Tower of Dr. Zalost. It originally aired on October 18, 2002.

A masked woman with a mysterious past comes to the farm and starts attacking Courage. Fearing the safety of his owners, Courage must repair the root of her problems so she can leave.

Muriel is collecting eggs inside the henhouse while Courage is nearby on the ground asleep. A masked woman arrives and proceeds to whack him with a washbasin. When Muriel comes out, she thinks that the woman is Courage's friend playing with him. She invites her over to the farmhouse to stay for a while. At the dinning room, the masked woman reveals her name to be Kitty. She explains to the Bagges about her best friend Bunny, who fell in love with a gangster named Mad Dog, and that "all dogs are evil." However, upon realizing Mad Dog’s true colors, Bunny tried to flee, but was eventually overpowered and restrained, and Mad Dog forced Kitty to stay away from them for good. With no where else to go, Kitty was forced to take shelter elsewhere.

After dinner, Kitty attacks Courage twice more, when he is alone in the living room watching television and later alone again in the bathroom plugging the toilet. Muriel makes a bed for the guest in the garret. At night, Courage spies on Kitty and sees how she plays with a toy mouse, which is a reminder of Bunny. Once Kitty takes off her mask, Courage shrieks and is convinced that the Mask is evil. He tells Muriel and Eustace, but they don't believe him. So, in an attempt to protect them both, Courage locks his owners and Kitty in their rooms, and steals the toy mouse, supposedly as evidence for the police.

Courage drives to the Diner and learns from Charlie the Mouse that Mad Dog has Bunny in his apartment. Meanwhile, Muriel, Eustace, and Kitty try to get out of their rooms. Kitty succeeds and goes to look for the stolen toy mouse, assuming that Courage stole it. Courage soon finds Bunny and saves her from Mad Dog, who gets involved in a high-speed chase. Mad Dog's car winds up driving on the railroad tracks and is eventually smashed by a powerful locomotive hauling an Amtrak passenger train, killing him.

As Courage and Bunny escape, they see Kitty on the train, who pulls Bunny up with her. As the train speeds off, the two happy friends thank Courage and admit that not all dogs are evil. In the morning, Courage returns home, and Muriel tells him that Eustace now uses the mask Kitty left behind in order to protect his face whenever he does dangerous work.

Muriel: "Ohhhh Eustace the kitty was right about you. You can't fix a thing!"
Eustace: "Oh yeah? You want some chocolate?"

Charlie: "He and his gang live down the road. You know where. After you get Bunny out of there tell her Charlie says 'Hey.'"

This is one the rare instances of an episode from the series that is considered controversial. The reason for this is due to the topic of lesbian relationships, which is negatively looked down upon by many religions, mainly Christianity. 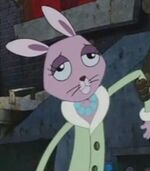 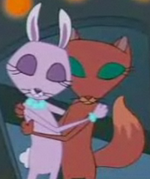 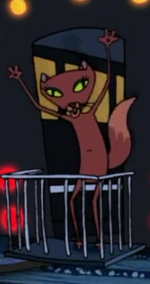 Retrieved from "https://courage.fandom.com/wiki/The_Mask?oldid=36144"
Community content is available under CC-BY-SA unless otherwise noted.