Wrath of the Librarian

Jim Mitchell
Wrath of the Librarian is part two of the twelfth episode of Season Four of Courage the Cowardly Dog, which aired November 15, 2002, following Cabaret Courage.

One day as Courage is digging in the yard, he discovers an overdue library book he was supposed to return two years ago, called "The Pixie and the Prickle Pirate." Muriel sends him to the library where the Librarian checks the book, and Courage is left with a fee of about $3,000. Courage is unable to pay, infuriating the librarian. As he leaves, the librarian places a curse over the book.

Courage arrives back at the Bagge Farmhouse where he discovers the book sitting on the front porch. He shows the book to Eustace and Muriel and they both get paper cuts. And now the curse begins to take action, turning Eustace into the Prickle Pirate and Muriel into the Pixie. Eustace begins chasing and trying to capture Muriel and mistakes Courage for his sidekick spike. Muriel runs from the farm followed by Eustace. Courage goes after his owners and chases to and through the town, where on-goers look on in amazement as Eustace tries to shoot cannonballs at Muriel, who is standing on the rooftops.

Courage tries to get help from Dr. Vindaloo, and after an ordeal with an ice cream cart, Dr. Vindaloo explains "There is nothing he can do about it. Nothing at all." Muriel and Eustace begin battling atop a billboard and Courage races to the library to fix the curse before Muriel and Eustace injure themselves. And to Courage's horror, the book fee is rapidly increasing.

But Courage gains an idea to sell tickets for $100 to let the townspeople watch the Pixie and the Pirate fight. He acquires the money, pays the fee and the curse is lifted.

Muriel as the Pixie 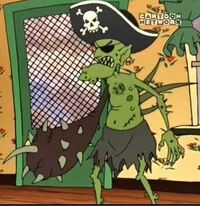 Eustace as The Prickle Pirate
Add a photo to this gallery

Retrieved from "https://courage.fandom.com/wiki/Wrath_of_the_Librarian?oldid=34168"
Community content is available under CC-BY-SA unless otherwise noted.